The Dragon Spirit was evolved from the evil dragon Neya who was sealed in the Shadow Knight's body. After a lengthy purification, it becomes a power source of the knight.

The Dragon Spirit is permanently converged with the Shadow Knight (namely an associated Eudemon). Through the Sacrifice, the knight can improve the Dragon Spirit's attributes and star level, and also achieve exclusive skills and special mounts.

The Sacrifice, as the main method to strengthen the Dragon Spirits, provides 9 ways available, and 6 of them grant exclusive skills – the Dragon Skills . Choose the best way for your Dragon Spirit.

above the item bar to access the Sacrifice interface.

Earn 500 points of Anima to acquire the Dragon Skill, [Bloodthirsty].

To carry out the Anima Sacrifice, your character should be above Level 40. There are no limits on the type of the Minor Eudemon that can be used, which considerably reduces the cost. 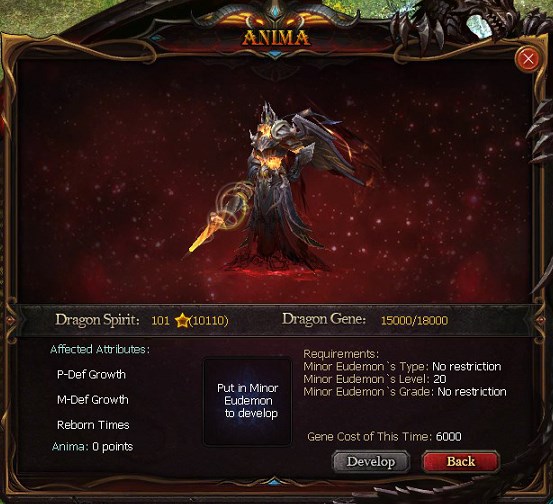 Earn 100 points of Charm to acquire the Dragon Skill, [Tenacity].

To carry out the Anima Sacrifice, your character should be above Level 40. There are no limits on the type of the Minor Eudemon that can be used, which considerably reduces the cost. 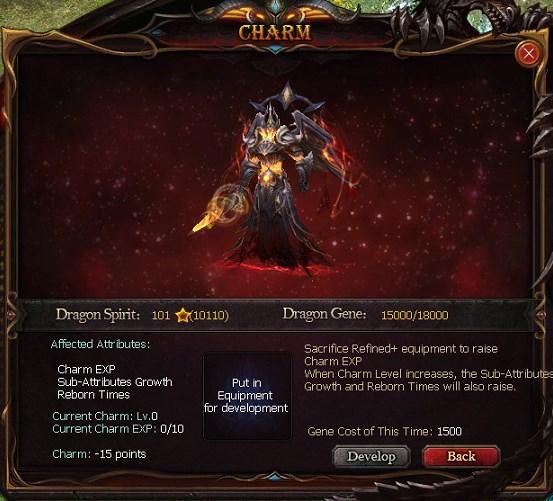 Earn 100 points of Origin to acquire the Dragon Skill, [Piercing]

The Origin Sacrifice defaults to be activated. Without the need to sacrifice any Minor Eudemons, it randomly improves one of the Initial Attributes and increases the Reborn Times by 1. Generally, it takes 1 hour to finish the sacrifice. The higher the grade of the Origin, the longer the sacrifice time. Each 30 minutes of character online time will speed up the sacrifice 5 times as fast as normal. 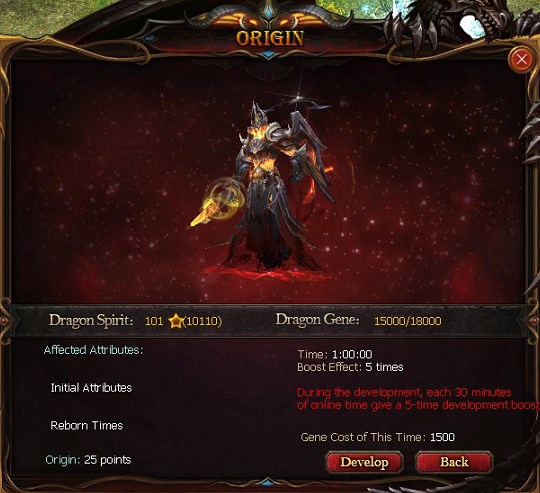 Earn 60 points of Luck to acquire the Dragon Skill [Immortal].

The Luck Sacrifice can only be performed by Level 70+ Shadow Knights. After the sacrifice, the Luck and Reborn Times of the Dragon Spirit will increase. 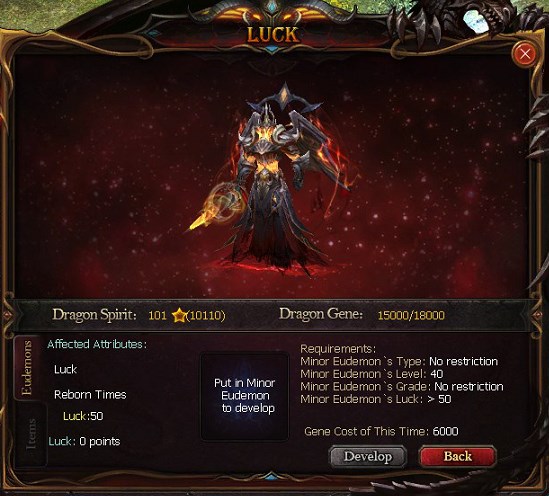 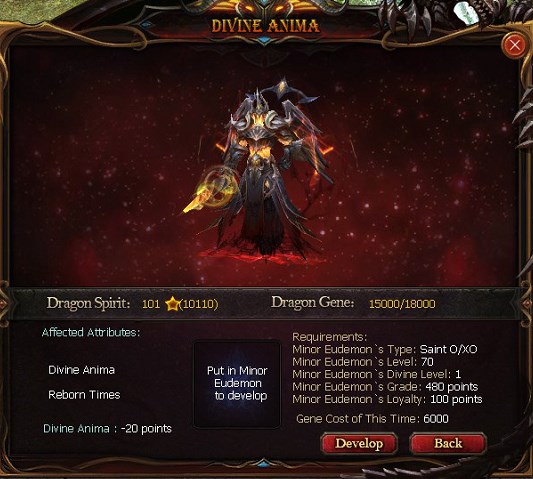 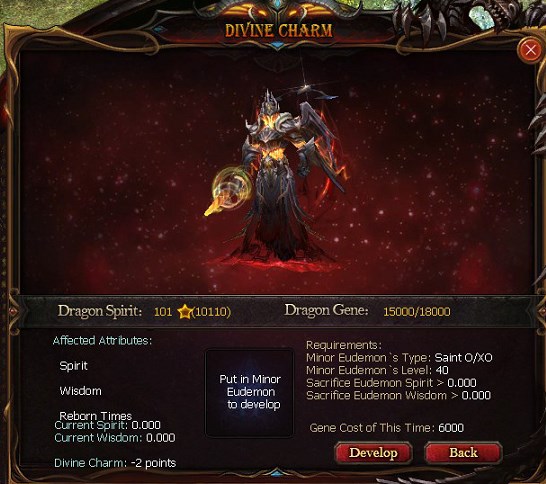 2. The character should reach Level 70;

3. Use a Level 40+ Eidolon as the Minor Eudemon to sacrifice; 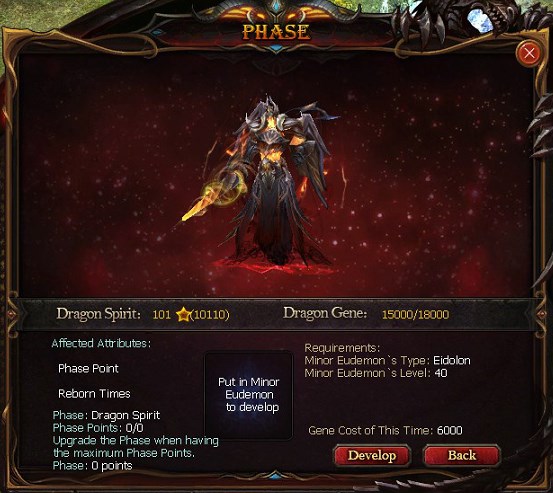 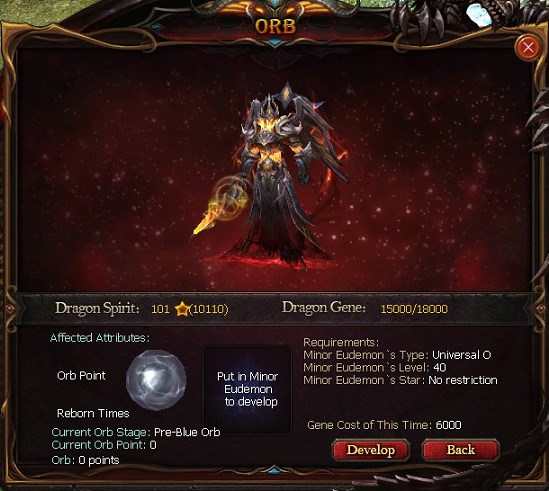 When the Dragon Spirit reaches 30-Star, the knight can carry out the Agate Sacrifice to improve the Agate by chance (It maybe fail.). A Universal O/XO is needed for the sacrifice, each time. Same as the Orb Sacrifice, its success rate is not 100%. If it fails, the Agate value will decrease, but its level will not be degraded. 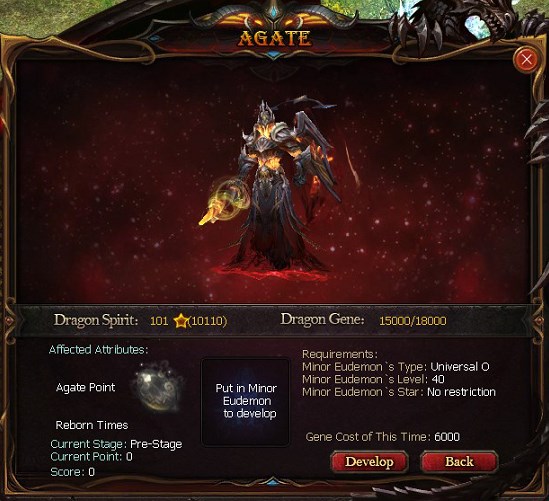