Thanks to the players who have been providing us with a variety of clues recently, and also thanks for your support and company.

Below is a list of the hackers who have been punished so far.

If caught using a illegal program, the player will be placed in a BotJail.

The first time players are placed in Botjail, the player can confesses his mistake to the BotJail NPC and get released.

Starting the second time, hefty EPs are required to get out of BotJail, and the penalty will increase with the number of times players are sent to BotJail. 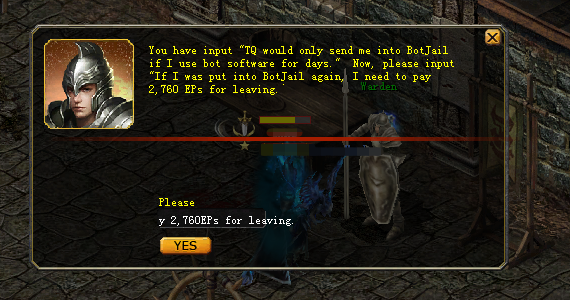 Note: We will ban players for 7 days if they are catched too many times or if the behaviors are serious. Thanks to all the heroes for their understanding and cooperation.

We will keep take action to hackers and release some lists about hackers.

Note: If you want to report a hacker, please send a letter to service@eudemons.com via the hackers name and server, videos as evidence.