Notcie Regarding the Servers Merge and Events

We will merge servers on the maintenance of Sep 16th. The merge may take a few hours to finish. Please plan accordingly.

The level of the characters, items, gold and Eudemons in the inventories and warehouses, the Eudemon Warehouses and Eudemon Hatchers on Elysium/Scorpio server will be completely retained.

If you have two characters in both merged servers with the same account, you need to delete either one before the servers are merged. Otherwise, the character on Elysium/Scorpio server will be automatically deleted by the system (The character can be retrieved via the Mannequin System).

You can even retrieve your deleted characters by following the instructions below:

How to retrieve your deleted characters via the Mannequin System:

You can find your deleted characters by opening your Mannequin window after the current character has reached Level 50 (if you already have more than 5 mannequins currently on London, you can delete mannequins you don't need to restore mannequins you need.)

Click on the "Login" button, the offline character will become online - together with other online characters.

If you want all mannequin characters to be online, just click on the button "Login All". All the lost items will also be found in the deleted characters. 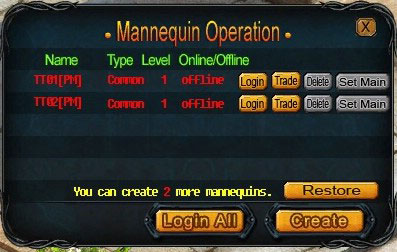 After the two servers are merged: After servers merge, players can log in to the merged server from the original server entry. The Eudemon IDs will be kept. Consequently, two different Eudemons may share the same Eudemon ID in the new server.

During event period, people can get coins after hunting bosses.

People who are level 131+ can get a merge pack when login during event Duration. And they can get coin from pack when they open the pack on following day.
4. Coin Shop
Duration: Sep 17th - Oct 31st
People can use coins to exchange with reward in Coin Shop! Check what you can exchange with in game then!
Top