All Legions have set their sight on the Kings Battlefield where there are opportunities and threats. Legion members can now enter this Battlefield to confront terrible monsters and compete with rival elites for their Legion. The Legion that finally occupies the Kings Battlefield will become the Champion Legion of the week and enjoy the most benefits including Merit rewards and permit to enter starry treasury in the week ahead.

The Defending Legion that is the Champion Legion last week needs to prevent Attacking Legions occupying Energy Stations in 45 minutes.

All Legion members can enter the Kings Battlefield to fight for the Legion Championship. 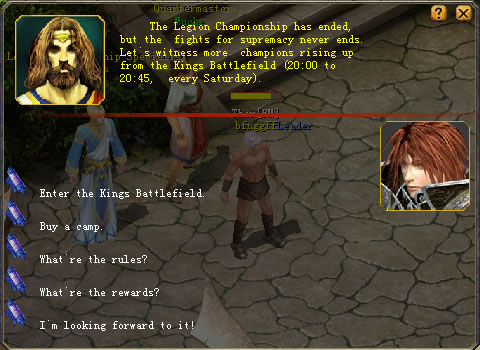 How to Occupy:
Locate an Energy Station and then click it to start focusing the power to occupy it. The more people from the same Legion clicking this station at a time, the bigger chance of this Legion winning the station. It allows up to 5 people clicking a station at a time.

Reoccupy:
When an Energy Station is occupied, the Defending Legion can reoccupy it in the similar way mentioned above to prevent this station from providing Energy Points for Attacking Legion.

Killing monsters in the Kings Battlefield can also bring Energy Points. Please note that defeating the Bosses in the Battlefield will provide you not only Energy but also different buffs (more details are described in the monster part). Do not miss this easy and safe way to collect Energy Points.

Wellington is one of the Four Lords of the Battlefield who has great power of hurricane. The Legion that defeats Wellington will take control of the hurricane that makes all members move faster.
Hurricane Buff: Speeds up all members’ movement in the Kings Battlefield.
Follower: Doom Warrior

Baldwin is one of the Four Lords of the Battlefield who keeps a breakthrough force. The hero who defeats Baldwin will get higher Battle Power.
Force Buff: Increase a hero’s Battle Power in the Kings Battlefield.
Follower: Doom Warrior